One of Donald Trump’s most senior cabinet members and his Scots wife have close ties to a trust spearheading plans for a contentious luxury housing development in one of Scotland’s most sought after neighbourhoods, Scotland on Sunday can reveal.

The entity, known as the Rockshiel Trust, intends to build swaths of modernist townhouses and apartments in a coveted conservation area in Edinburgh.

The trust is among a slew of Scottish property holdings and Bank of Scotland accounts worth up to £9m that have been disclosed by Steven Mnuchin, the US Treasury secretary.

Documents filed with the Office of Government Ethics (OGE), a Washington DC-based agency of the US government tasked with preventing conflicts of interest in the executive branch, show Mnuchin listed at least five properties in the capital as part of the multimillion pound international portfolio of assets he has with his wife, the Edinburgh-born actor Louise Linton.

However, the US Treasury Department stressed that Mnuchin, 56, has no financial interest in the Rockshiel Trust, and that it was only disclosed on his OGE forms due to his wife's interest in it.

Linton, 38, is a beneficiary of the trust, which stands to make a sizeable windfall if its plans for 17 properties in west Murrayfield’s Kinellan Road are greenlit. The average house price on the street stands at nearly three quarters of a million pounds.

The Treasury Department declined to comment on why a series of shareholdings held by Linton in other Scottish companies have not been disclosed by her husband.

Neil Findlay MSP said that at a time when Edinburgh is suffering from an affordable housing crisis, the plans by those “linked to the heart of the Trump administration” are the “last thing” the city needs.

While neighbours in Murrayfield are unaware of the involvement of the controversial couple in the proposed multi-story housing development, the plans have already attracted scores of objections to date.

A series of photo montages submitted to the City of Edinburgh Council's planning department reveal the trust has applied to build ten five-bedroom townhouses, five three-bedroom apartments, and two two-bedroom apartments in the upmarket area.

The cluster of three and four storey modernist buildings would be located in the current grounds of Rockshiel, an imposing 19th century villa located.

As part of the development, extensive excavations would lead to the loss of an ornamental pond in the villa’s grounds and with it, a slice of the city’s Georgian heritage. 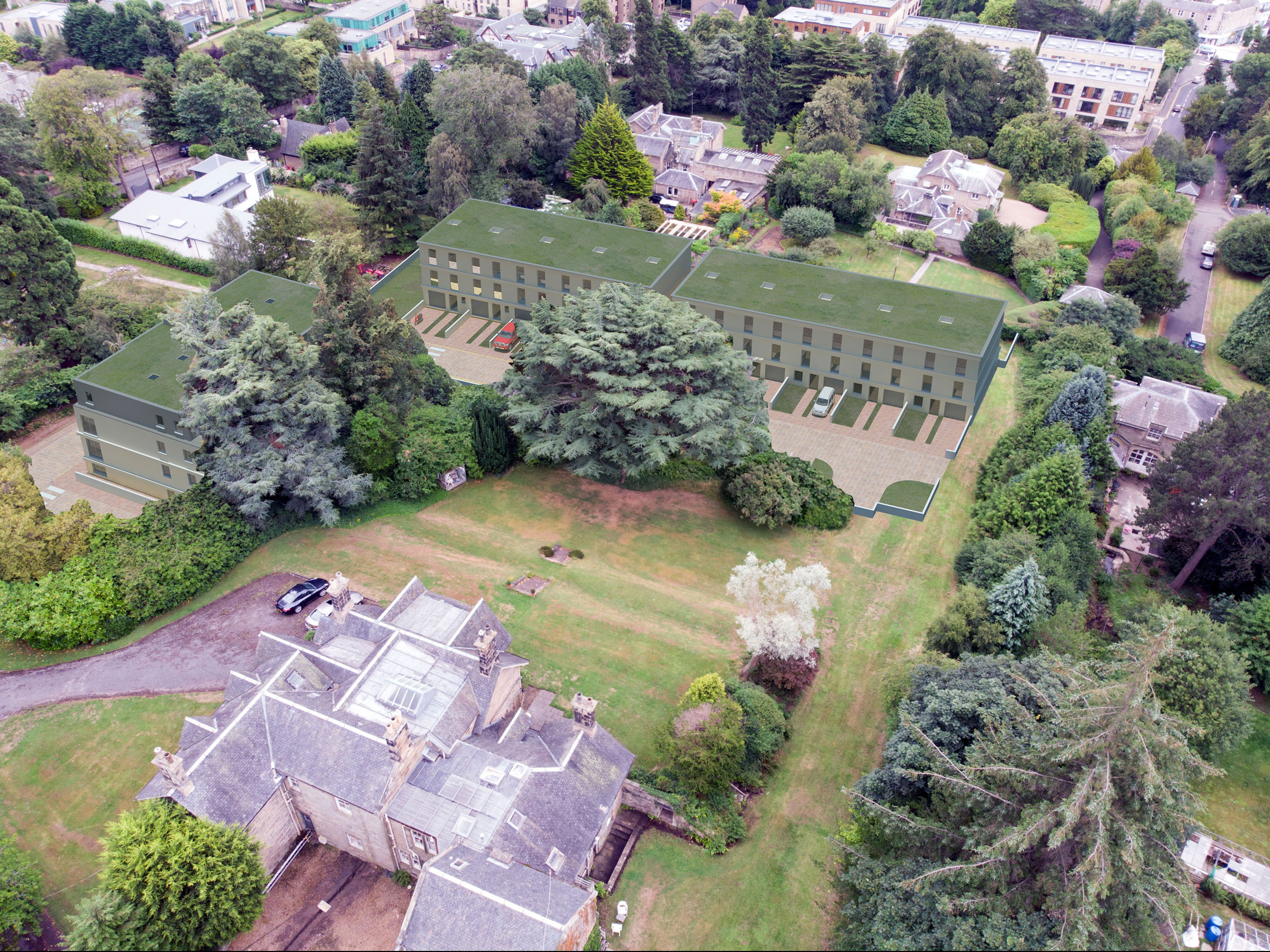 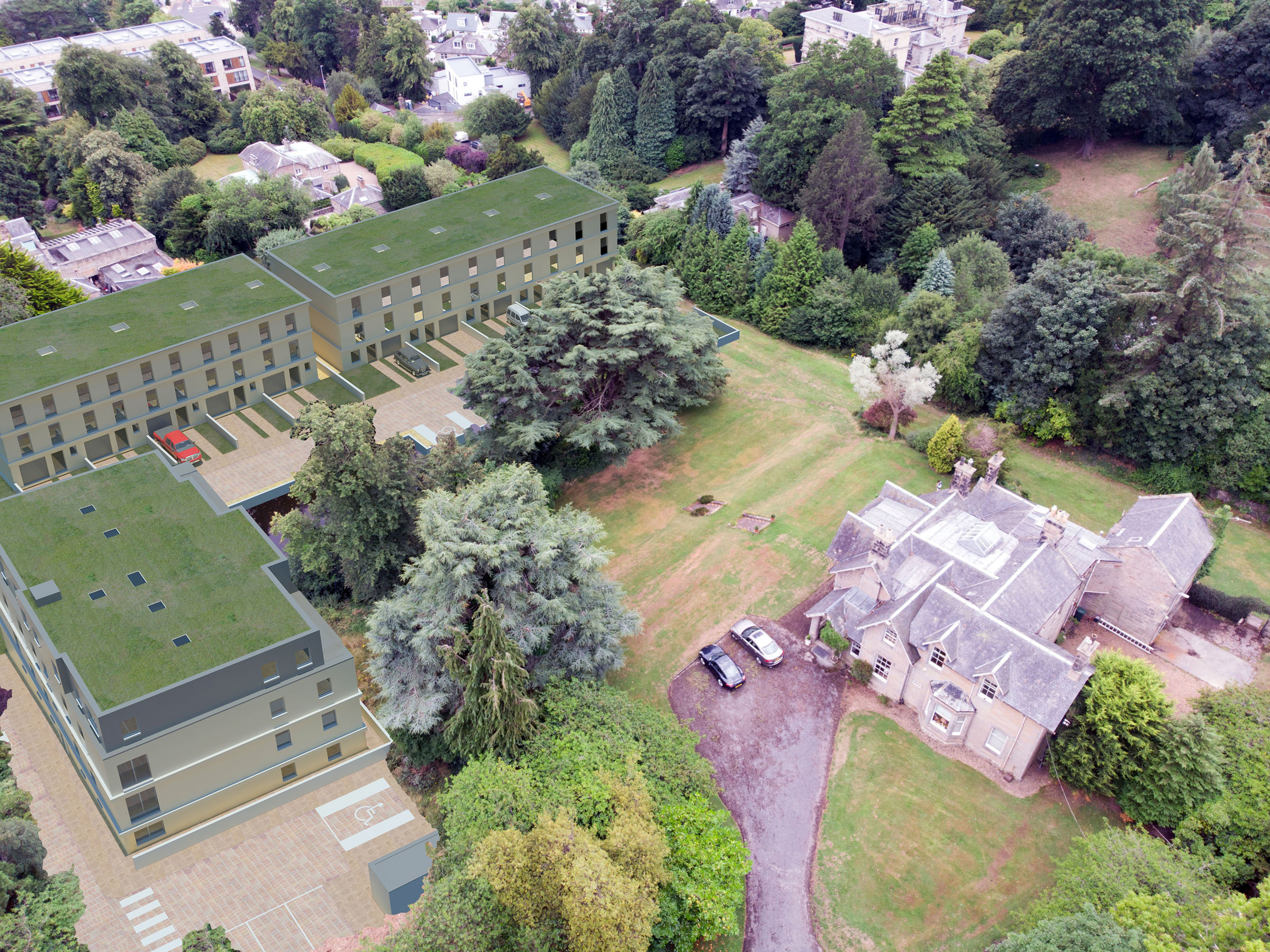 The housing development would be built in the grounds of a 19th century villa.
Photo montage 3 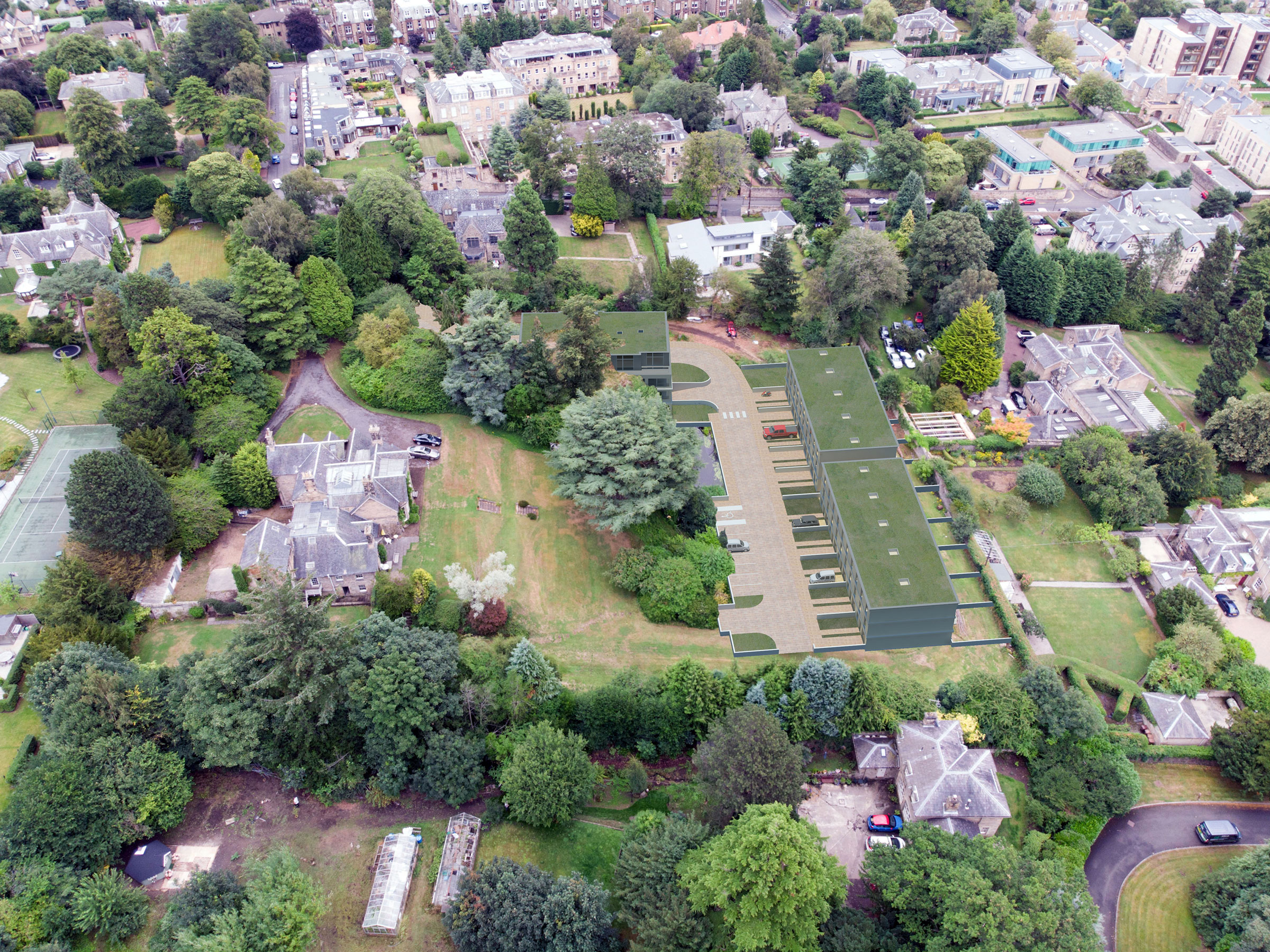 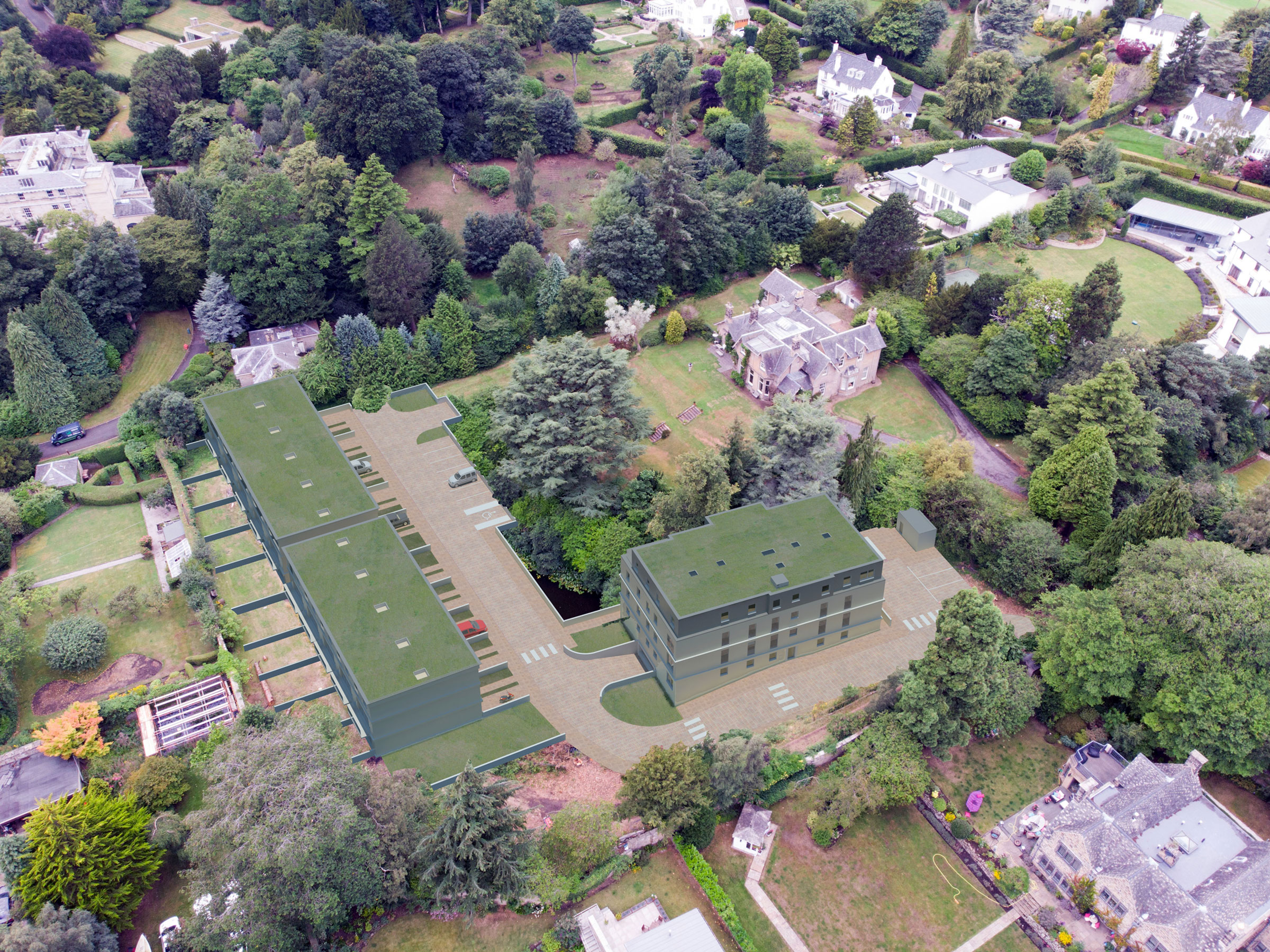 According to John Lawson, an archaeology officer with the local authority, the pond itself may pre-date the villa and is “archaeologically significant.”

Given the grounds of the neighbouring Belmont House, an A-listed Italianate mansion, were landscaped by William Playfair, the architect credited with shaping the capital’s modern-day cityscape, the pond could be even more important.

Lawson said that if the Rockshiel site was associated with Playfair, it could be considered as being of “national significance.”

However, the Rockshiel Trust insists Playfair had no role in the creation of the pond, which it described as a “dangerous” and “flooded” quarry.

Murrayfield Community Council has also objected to the plans, pointing to a “strong feeling” in the community that the development would be “undesirable.”

In all, some 48 objections have been lodged against the scheme, with the council’s roads authority also recommending that the application be refused on the basis that its planned 52 car parking spaces would constitute a breach of local authority parking standards.

The Rockshiel Trust lodged the planning application with the council in January. It was withdrawn last month, following feedback from planners. However, it intends to resubmit a redesigned blueprint.

A spokesman for the trust said it is domiciled in the UK. Land records in the General Register of Sasines show Linton’s father, William Hay, disposed of the villa and the grounds at Kinellan Road to Rockshiel’s trustees in 1997.

Findlay, the Labour MSP for the Lothians, said the development would serve only to profit those behind the trust.

He said: “Edinburgh is going through a housing crisis. We see more and more people sleeping in the streets every day and families unable to secure affordable accommodation in the city they were born in.

“Now we see someone linked to the heart of the Trump administration developing a prime area of the city, seeking to maximise their return. This application sounds as though it is the last thing that Edinburgh needs.”

He added: “Should the application be refused, the Rockshiel Trust will have the right of appeal over the community because the Scottish Government joined with the Tories in the recent planning bill to deny communities equal rights of appeal in the planning process."

The raft of Scottish assets detailed by Mnuchin in his filings to the OGE raises several other questions for the man responsible for stewarding the largest economy in the western world, not least over his valuation of the Rockshiel Trust’s landholdings.

While the land set aside for the housing is undeveloped, Registers of Scotland records show properties on Kinellan Road have fetched as much £1.3m.

Zoopla, one of the UK’s largest online property sites, states that the average house price on the street stood at £748,539 as of last month.

Mnuchin’s financial disclosure also details three commercial properties in Edinburgh with a top value of $5.3m (£4.4m), another residential property in the capital worth up to $5m (£4.1m), and three other Bank of Scotland accounts containing as much as $365,000 (£302,000).

While the OGE rules compel officials like Mnuchin to disclose their spouse’s assets and income under the US Ethics in Government Act of 1978, Scotland on Sunday has learned his disclosure does not include several of Linton’s shareholdings in her homeland.

Companies House records confirm she is one of three shareholders in Linton Hay Properties Limited, which is registered at Rockshiel villa’s address. The company is Linton’s family’s property management firm. The other shareholders are her brother, David, and sister, Suzanne.

In 2016, it attempted to convert a lock up garage in Edinburgh’s Murieston Road into a studio flat, but the plans were rejected on the basis that the 29m² of floorspace “would not result in the creation of a satisfactory living environment.” The application was subsequently approved on appeal.

Linton Hay Properties is not listed in Mnuchin’s OGE paperwork, nor is Linton’s shareholding in Melville Castle Limited, as detailed in the most recently available annual returns on Companies House. Linton spent her teenage years in the castle in the Midlothian village of Lasswade. It is now run as a luxury hotel and wedding venue.

The OGE has yet to certify Mnuchin’s latest financial disclosure, with the watchdog taking issue with his decision to sell his stake in a film business called StormChaser Productions to Linton, who was his fiancee at the time.

A spokesman for the Rockshiel Trust said: “Louise Linton is a beneficiary of the trust. She is not a trustee and has no involvement in the administration of the trust, which is domiciled in the UK.

“The pond is actually a dangerous, seven metre-deep, flooded quarry and was not designed by William Playfair or any architect. The rock extracted from the quarry was used to build some of the garden walls in the local area.”

He added: “The proposed development is consistent with several other completed developments in the area and will offer both townhouses and apartments.

“The planning application has been withdrawn so that the development can be redesigned in line with feedback from the council's planning department.”

A spokesman for the US Treasury Department said: “The secretary has no financial interest in Rockshiel Trust, and the only reason it is on his financial disclosure is because of Ms Linton.”

Linton did not respond to a request for comment sent via her film production company.

Mnuchin and Louise Linton have become one of the highest profile couples of the Trump administration and, say their critics, totems of its brash, wealth-focused culture.

Trump and his wife, Melania, were among the guests when the couple married at a ceremony officiated by vice-president Mike Pence in June 2017. It did not take long before the newlyweds became embroiled in controversy.

According to ABC News, Mnuchin requested the use of a £20,000-per-hour US air force plane to fly him ad Linton to Scotland, France, and Italy on their honeymoon.

The request was later cancelled, but just two months after their wedding, Linton joined her husband on a US military flight to Kentucky, uploading an Instagram photo in which she included hashtags promoting luxury brands she was wearing, including Hermes and Valentino.

When she was criticised by another Instagram user for apparently flaunting her wealth, Linton taunted the woman for not earning as much as she does and for contributing less in taxes. She later apologised, and Mnuchin reimbursed the US government for his wife’s travel.

Prior to entering public office, Mnuchin was a Goldman Sachs banker who went on to carve out a career in movie production, with credits on blockbusters such as The Lego Batman Movie and Suicide Squad. Forbes estimates he has a personal fortune in the region of £320m.

Linton was widely lambasted in 2016 for writing a memoir about her gap year in Zambia in which she claimed she feared she would be raped or murdered by Congolese rebels. It was later removed from sale after a series of factual inaccuracies came to light.

The Fettes-schooled actress has assumed a comparatively low-profile of late, busying herself with her film production firm. She recently wrote, produced, directed, and starred in ‘Me, You, Madness’ a comedy with a “big message” about love and family, in which she plays a sociopathic bisexual serial killer. It has yet to secure a distribution deal.

In an interview with Los Angeles Magazine in June, Linton was asked her advice for others in her position.

She replied: "Run, don’t walk, straight to the Office of Government Ethics and ask them to take you through their lists of guidelines and rules."

Live poll - 81 votes Opinion Poll Should the new homes be allowed to go ahead?
No Undecided Yes