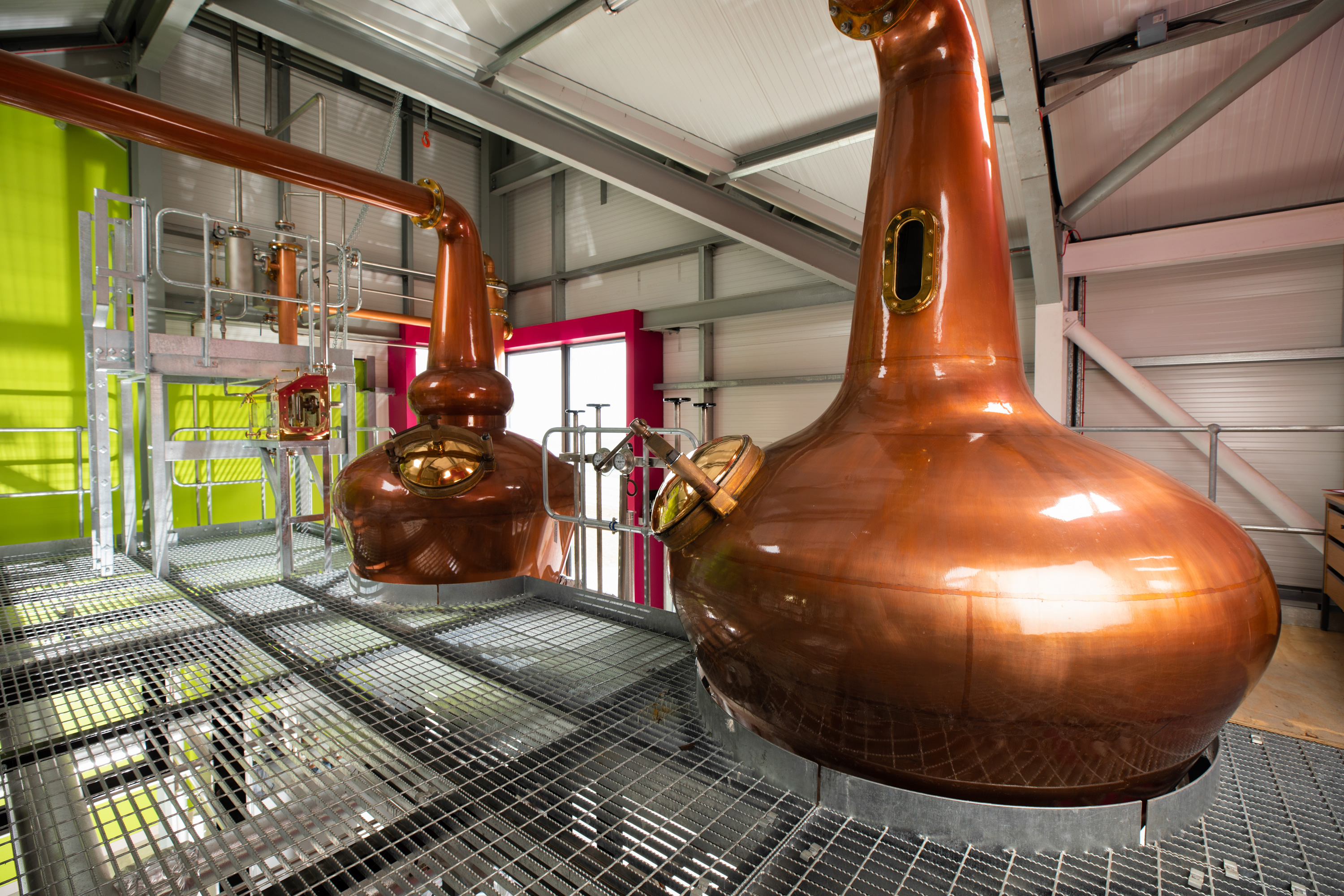 In 2016, locals in a small Highland community were offered a unique opportunity.

The chance to invest in, and part-own, a brand new whisky distillery.

There was a target of £1.5million to get the plans in motion.

The launch, organised in conjunction with Community Shares Scotland (CSS), offered investment opportunities from £250 to locals living in all IV postcode areas.

Shares were also open to whisky lovers worldwide with investment opportunities of up to £100,000.

Though the modern whisky boom had only just hit the headlines, the current gin craze was still in its infancy.

The chance to own part of a distillery in an area that had seen many historic names shut down was a risk, but it paid off.

Speaking at the time, helicopter pilot and farmer, John F Mckenzie, who was behind the plans to resurrect whisky production in the town some 90 years after its last distillery closed, said: “From the outset we have envisaged the project as more than a distillery.

"It is an opportunity for all social investors to help reinvigorate the historic town of Dingwall. GlenWyvis will be built on its whisky heritage, its community-ownership and its environmental credentials.”

Just three months later, the target was smashed and was extended to £2.25 million with a few days until deadline to allow last-minute Scotch enthusiasts to get in on the action.

At this point a team of five had been hired, along with distillery manager Duncan Tait, who left his role at Mortlach distillery in Speyside to join Glenwyvis.

A bold idea was starting to become a reality. 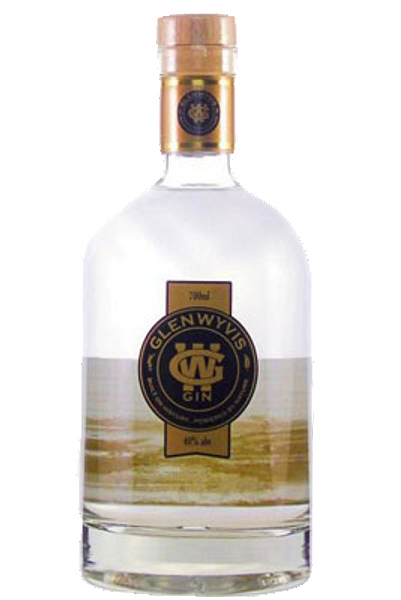 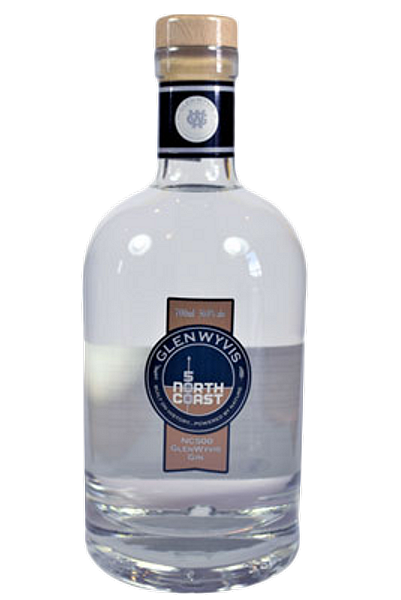 Fast forward three years since the start of the fundraising campaign and the distillery sits proudly at the top of a steep, narrow road (meaning that sadly it isn’t open to visitors).

It sits in the shadow of Ben Wyvis and overlooks John’s farm and the valley below.

Powered by its own wind turbine, solar panels and hydro power, the building couldn’t be further removed from the former distilleries of the area, yet this link to the past is not forgotten.

“This area was known for its whisky distillation, with a few big names having based themselves here in the past," says Craig MacRitchie, head of sales and events coordinator at GlenWyvis.

"We pay homage to them in our name and our strapline - ‘built on history, powered by nature.’”

“We are building on the rich distilling history that we have here in the eastern Highlands, which has been lost," adds Craig.

"When people think of whisky and gin they think of the big distilling areas such as Speyside, or further north or the west coast but they don’t tend to think of here.

“Firstly, Ferintosh distillery, which was known as Ben Wyvis distillery until 1893, was the first legal distillery in Scotland and one of the only distilleries in the UK that was able to produce spirit without paying duty to the government.

“Despite this, they stayed loyal and to thank them the UK government agreed they wouldn’t have to pay duties on whisky from his new distillery which made it much cheaper to produce a high quality product.

"This was supposed to be forevermore but a petition was put in to say the deal wasn’t fair so it was revoked by HMRC and the distillery closed down shortly after that.

“It was mentioned by Robert Burns in one of his poems to Scotch drink. In one of the verses he says: ‘Thee, Ferintosh! O sadly lost! Scotland lament frae coast to coast.’

"This shows the place it had in the culture then, and that distillery (Ferintosh) was just down the hill from us now and the first that we took inspiration from.”

The other names known for whisky in the area included the original Ben Wyvis distillery, which was on the edge of Dingwall and was built by local ironmonger and agricultural merchant D.G. Ross in 1879.

This is where Glenwyvis took the 'Wyvis' part of their name from - the mountain and the original distillery in the town.

The second distillery nearby was Glenskiach, which opened in Evanton in 1896 and was designed by famous distillery architect of the time Charles Doig.

Both Ben Wyvis and Glenskiach both closed down in the 1920s because of the economic climate and prohibition in America, which had been a big importer of whisky.

In 1965 a second Ben Wyvis distillery was opened by the Invergordon distillery but most of the single malt went into blended whiskies.

In 2015 John started thinking of things to bring to Dingwall in order to rejuvenate the local area, because a lot of the services in the town had been lost to Inverness.

He thought about what Inverness doesn’t have, and a distillery was one of those things.

It was also important to John to create something eco-friendly, which is why GlenWyvis is one of the first distilleries in Scotland to produce its own energy, and hopes one day to be completely off-grid.

“We wanted to make the distillery as green as possible and, being located in the Highlands we’re not short on changeable weather” says Craig. 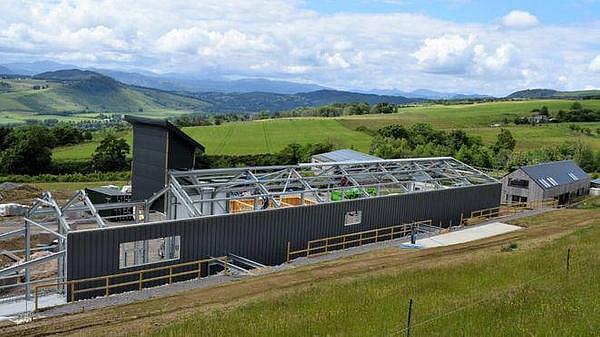 Distillery under construction Building works in 2017. 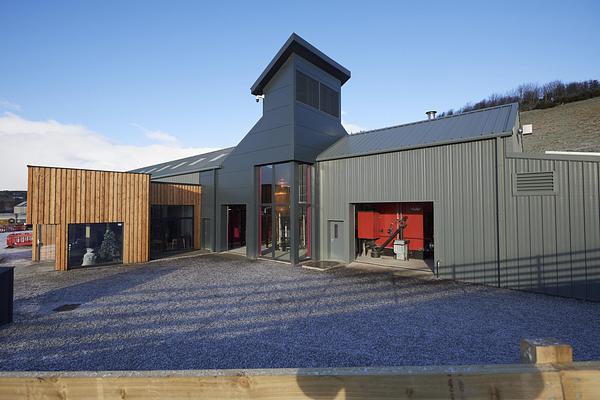 New build The distillery buildings were designed by Reynolds Architecture. 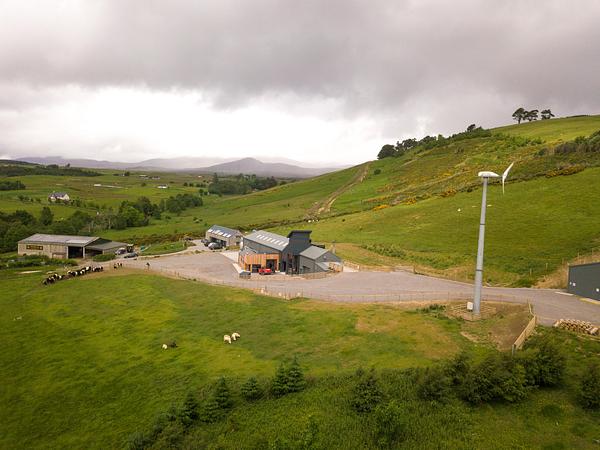 “We are one of the first distilleries in Scotland to produce our own energy, and our stills are powered by a biomass boiler, which came from Austria. We are only the second distillery in Scotland that has its stills fully fired by biomass but there are a lot more following suit now. The wood chips we use come from the local estate – we try to keep everything local here.

"Even the steel used to build the distillery was Scottish. It would have been a lot cheaper to buy Chinese steel but we wanted to support homegrown industry.

"Everyone who is employed here has come from about a 10 mile radius and our barley comes from Highland Grains. The by-products of distilling are used to feed the cattle - Highland cows and Belted Galloways and the Valley black nose sheep.”

“We launched the distillery funding in April 2016, the anniversary of the battle of Culloden, because we wanted to tie it into a date and we wanted to raise £1.5 million,” Craig explains.

“In the first day we raised £300,000 and in the end we raised £2.4 million from about 300 investors with 60 per cent coming from the IV postcode, so this is a locally owned distillery.

"About 75 per cent of the investors come from Scotland as a whole, 90 per cent from the UK and that final 10 per cent come from about 30 different countries, so it’s a real global community.

“A day after the fundraising closed I got about 400 emails asking if people could still invest, so we opened a second round of funding which reached £1.1 million.

"That is the most a community company has ever raised in the UK.

“The structure of the company is a community benefit society, we are not a limited company and what that means is regardless of amount invested, you don’t get any more say," Craig adds.

"More equity does not equal a bigger say so it is one vote per member regardless of investment.

Local investors
60 %
Scotland-wide investors
75 %
UK investors
90 %
Global investors
10 %
"Every decision put to the investors is very democratic - so about 60 per cent of local people have a very large say in what happens here.

"It also means that it’d be almost impossible for us to be bought over by any larger company without 75 per cent or more of the physical number of people wanting to sell, which is highly unlikely considering the whole remit of this distillery was community benefit.

“The shares were £50 each and the minimum investment was £250 so five shares minimum. We had a lot more people at £250, but there was a maximum of £100,000 and a few people wanted to invest more than that amount.

"We had, I believe, three investors at £100,000 and two of them live within ten miles the distillery, so even the highest investors are local,” explains Craig. 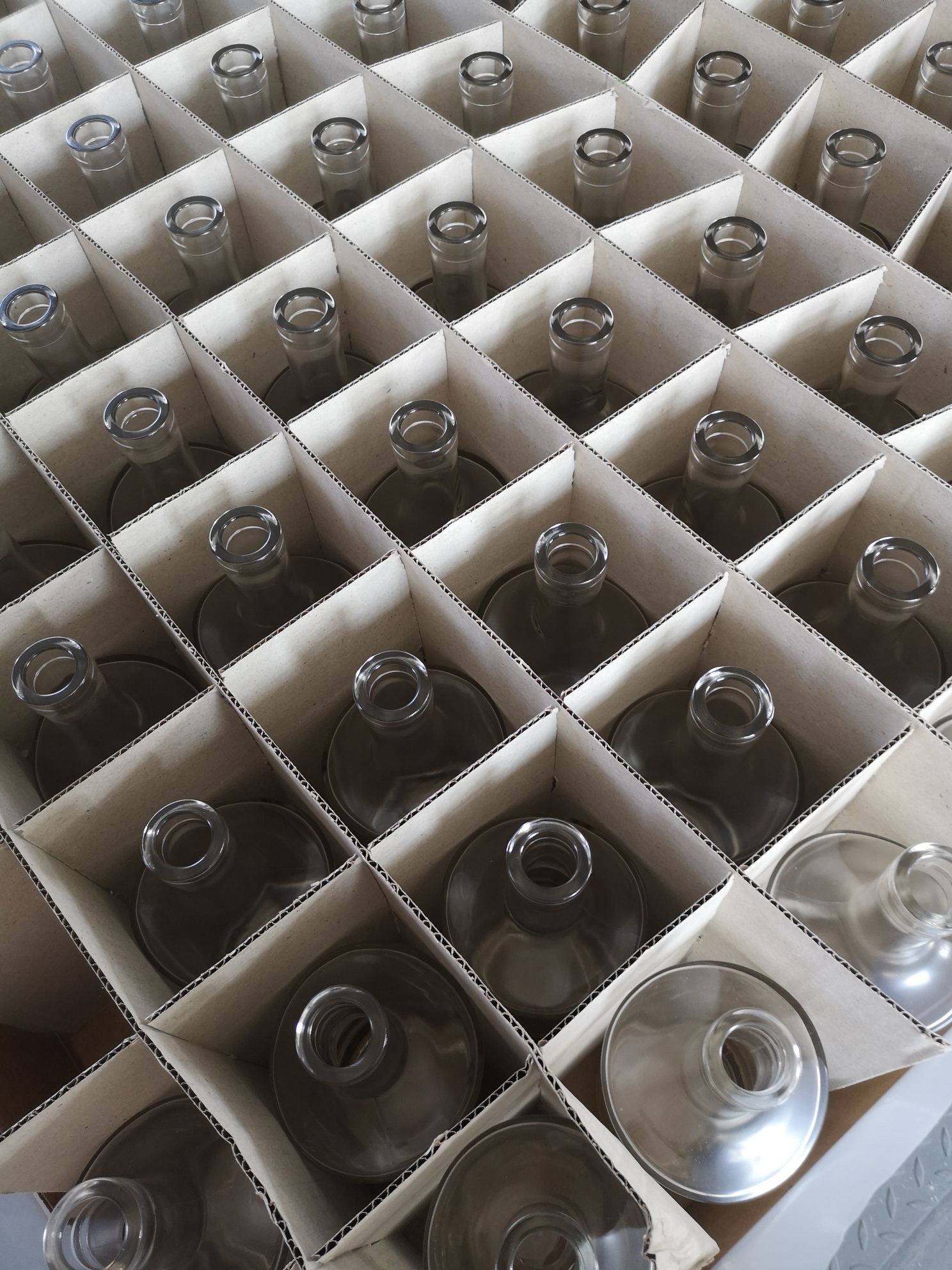 The bottling is done on-site, making this a small batch gin.
Labelling 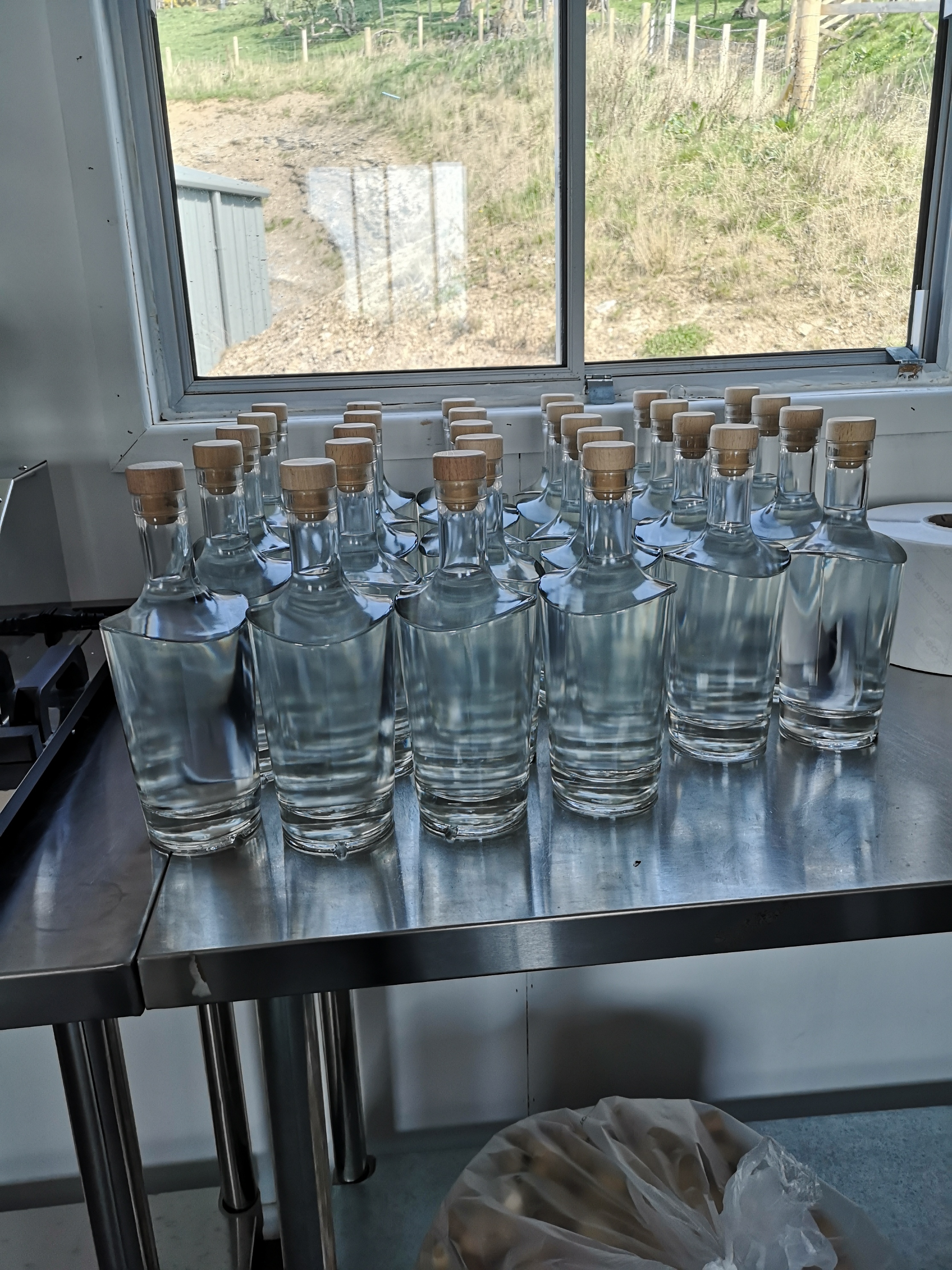 The labelling is also done on-site and, in the beginning of the gin production, was done by hand.
Goodwill Gin

The Glenwyvis Goodwill Gin is available to buy online and will be making its debut in supermarkets as part of Lidl's third gin festival.
Botanicals 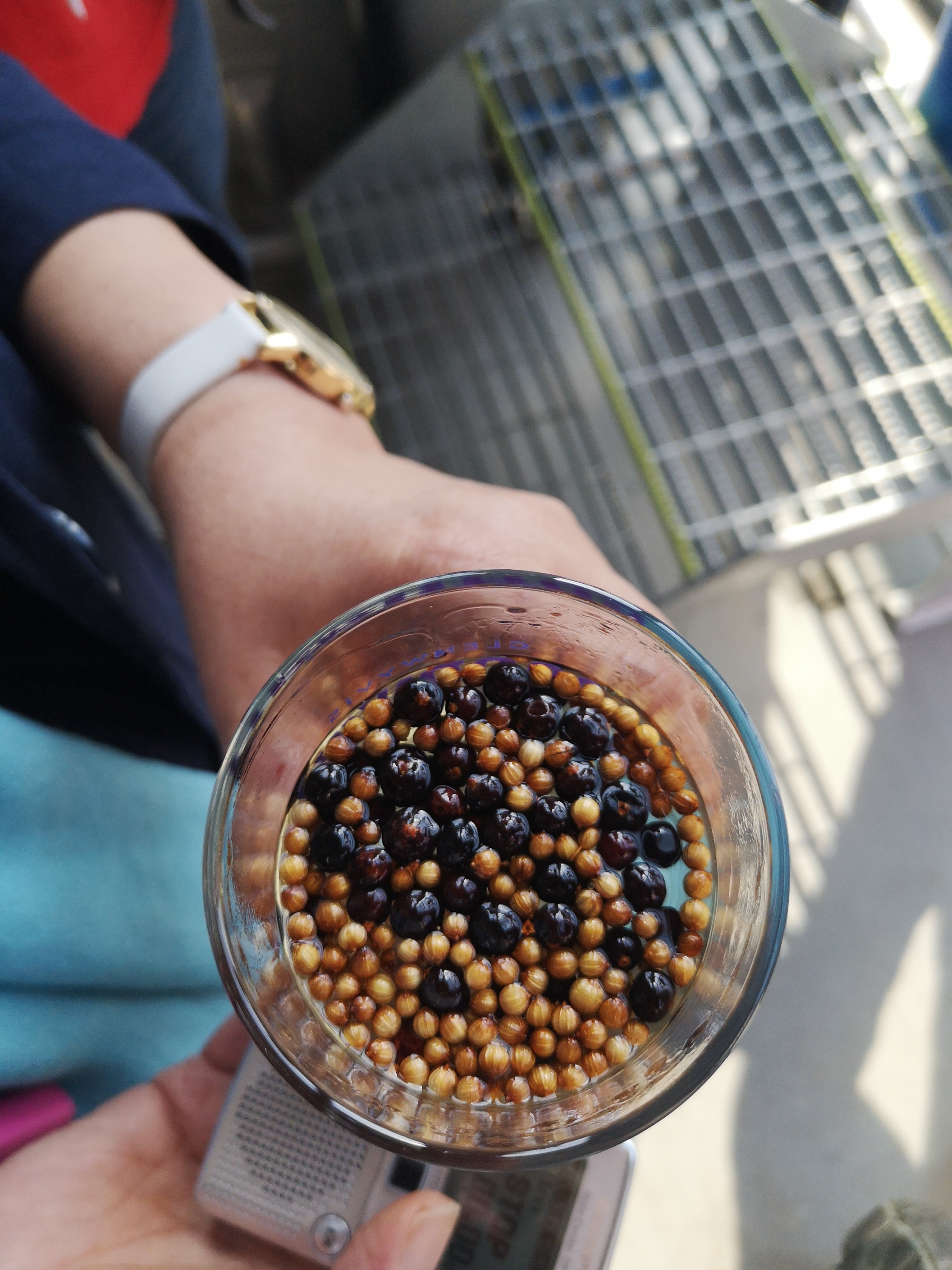 The botanicals used in Goodwill Gin include locally foraged hawthorn.

“We will be putting some of our profits back into the local community in the form of a pot of money for grant funding so people, such as local sports teams or charities, can apply.

"We’ve based the idea on the local wind farm/turbine who want to invest in things like a local cycle path to Strathpeffer.”

GlenWyvis Whisky A whisky was created to mark the rich past and future of distilling in the area. GlenWyvis bottled a 'Highland Inspiration' whisky to mark the historic laying of the distillery’s foundation stone in January 2017. GlenWyvis's whisky is still maturing in casks in the on-site warhouse.

The Glenwyvis whisky won’t have matured until 2021, so in the meantime they have produced a gin - Goodwill gin, which is available to buy now and features in Lidl’s 2019 Scottish gin festival.

“The reason we introduced a gin to the portfolio was we wanted a name on the shelf that people would recognise and see how they responded to it and it’s gone really well so far,” says Craig.

With a bright future ahead, this small but eco and community minded distillery is leading the way in the future of whisky production.

The community behind GlenWyvis have shown that a global and local group of people can come together to change the fortunes of what was once a lost region on the Scotch whisky map.

Which Scotch whisky region suits your taste?
What is your favourite part of Scotland?
Which flavour do you like the most?
What type of finish do you prefer in a spirit?
Do you prefer whisky with ice or water to mellow the flavour?
Do you like malted flavours?
When you smell peat, what do you think of?
Do you like the flavour of sherry?
How much ideally would you spend on a bottle of whisky?
How far are you from Scotland?
All done