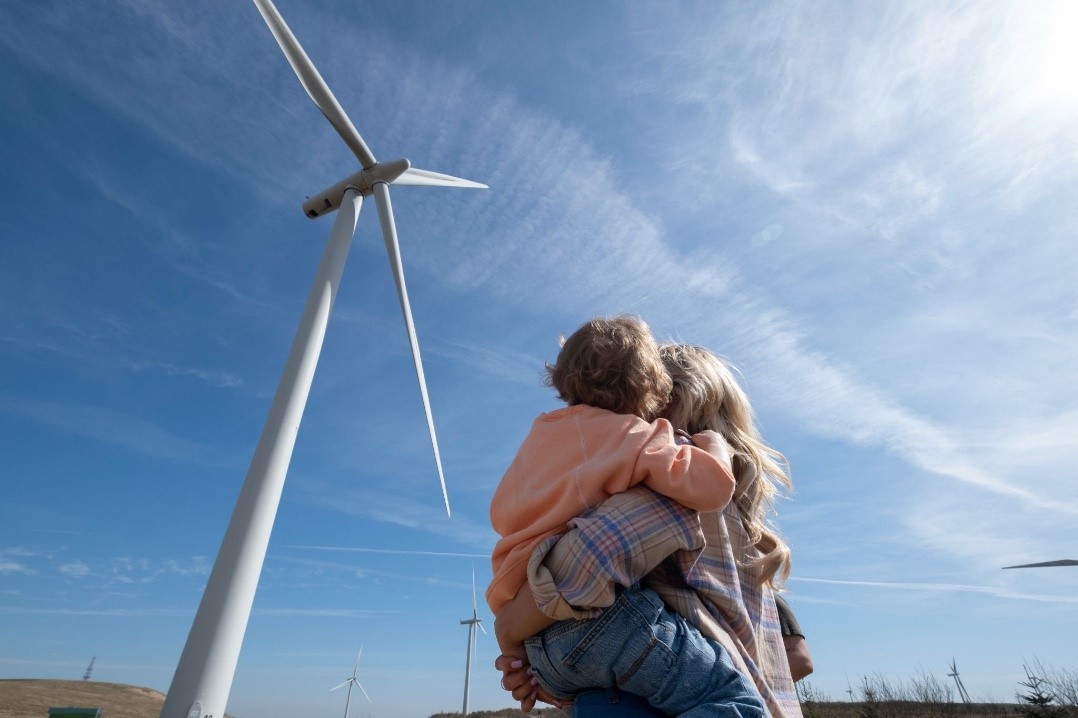 Of all the places in the world that could have hosted COP26 at such a time of intense environmental crisis and global scrutiny, it was perhaps fate that it should fall on a city known as the “Dear Green Place” to sow new seeds of hope.

And as the sun sets on the biggest climate event in living history, Mother Glasgow is the beacon of light for a planet in search of leadership, ready to deliver a pioneering new world order of climate action – a planet ready to mobilise climate finance to protect natural habitats and communities, where global net-zero could become a reality, and where governments, business and civic society work together to tackle the challenges ahead.

But what needs to happen next?

ScottishPower CEO Keith Anderson reflects on COP26: "For two weeks, Glasgow held the world’s attention as we tried to make progress on climate action. I hope everyone returning home keeps the same thought in their minds: that COP26 was the opening ceremony, not the closing one, of a renewed commitment to tackle climate change.

"We all know the numbers. Limiting the impact of global warming to 1.5 degrees is crucial. It means lower sea level rises, fewer droughts, heatwaves or storms. It also means a more diverse environment, helping preserve wildlife and wild landscapes.

"One of the things I often talk about is why the climate crisis is an opportunity, not an impossible challenge. We can use our year of the COP presidency to demonstrate this, showcasing the benefits of low-carbon living here in Scotland.

"At a national level, we’ve made some big changes already. We set a target for net-zero emissions of 2045 – five years earlier than the rest of the UK. We’ve dramatically increased the amount of clean energy we produce. And we’ve started building the future of clean transport, creating schemes like Chargeplace Scotland to power electric cars.

"This momentum will continue. In 2022, the next generation of wind farms, built off our coastline, will get the green light. Green hydrogen projects that provide zero-carbon fuel to our industries are in development. Meanwhile, Edinburgh and Glasgow are in a race to reach net-zero quicker than 2045. Each change brings the potential for new jobs, new investment and new ideas.

"Smaller changes can also be made to great effect. We’ve seen for years how community renewable energy schemes in the Highlands and Islands effectively replace fossil fuels.

"Individually as well, more people are taking decisions to help reach net-zero. Recycling more, walking rather than driving short distances and improving home insulation. More and more people are making the switch to electric vehicles instead of petrol and diesel, and there’s a growing understanding of the need to address how we heat our homes. Moving away from the gas boilers of the past to electric heat pumps. I hope we see this positive movement keep growing.

"COP26 was a big moment with big commitments. Yet its legacy could be felt through every action, no matter how small."

Scotland's politicians had plenty to say around COP26 and its lasting legacy
Fiona Hyslop, Scottish National Party
Mark Ruskell, Scottish Greens
Liam McArthur, Scottish Liberal Democrats
Liam Kerr, Scottish Conservatives
Monica Lennon, Scottish Labour
It is not a question of who must do more or who has the most responsibility, all must step up. As politicians. As citizens. But also, as businesses, as communities and as families. In every single walk of our lives, we all need to be prepared to do more.
Everyone needs to do more, but the world is at a crisis point which will not be solved with bamboo toothbrushes and recycling alone. It must be governments who lead the rapid transformational change required
While everyone has a part to play in changing their behaviour, the reality is that without government action, both on a national and global level, we will never get emissions under control and our planet will pay the price.
Everyone has a role to play in our journey to net-zero. The Scottish Conservatives want Scotland to hit these critical targets in a way that protects vital Scottish jobs and livelihoods and ensures we accelerate our recovery from our pandemic. The SNP-Green Government must deliver clear and consistent messaging that will bring the Scottish people with us.
We ll look back on COP26 as a defining moment of our era, for better or worse.

It's the growing conversation in every household and business across Scotland. Here's what other people are saying.

Scotland is changing, and so are the demands on the grid.

Over the next five years ScottishPower needs to accommodate up to one million electric vehicles on Scotland’s streets.

Up to half a million air source heat pumps could be installed in houses and commercial premises.

The electricity network is like the roads infrastructure, and needs to power through motorways, A roads, B roads and private roads to take power where it is needed.

Money where it is needed

SP Energy Network’s Green Recovery Fund put £20millon of investment into other businesses looking to electrify their fleet or change their heating. This helped FirstBus trial a fully electric bus, the first of 150 now being put into service.

SP Energy Networks also invested in the network for the “blue-light” community of emergency services, including £1million inside the COP26 corridor alone. And there is more to come.

1800 new distribution jobs will be created by ScottishPower, 500 directly related to net-zero transition, with another 130 in transmission and engineering.

But everything needs to change, from our own consumption to our views on the workplace.

As the first UK provider to generate all its energy through renewables, ScottishPower has pioneered onshore and offshore wind thanks in part to building such trust-driven relationships.

The company has made payments to date of an impressive £43m through voluntary community benefits. Churches and community centres needing roof repairs, for example, or football teams needing new strips have been traditional staples. In Kintyre, funding for a community shop with much-needed Post Office facilities, and a new 4x4 vehicle for Galloway Mountain Rescue were supported. So too was Food Train in the Borders, aimed at feeding the elderly.

It is the benefit most tangible to those communities adopting windfarms on their doorsteps, but the bigger prize is cleaner energy.

Whitelee Windfarm at Eaglesham, the largest onshore windfarm in the UK – a modern marvel of technology and nature existing side by side.

Some 800,000 people have now visited the site since it opened. Its trails are populated by runners, cyclists and dog walkers.

As such, it may be difficult to appreciate that it is also the centre of ScottishPower’s energy heart.

McQuade said: “It feels more like a country park when you go to it, rather than a power station and having gone to old-school power stations, it does feel different. The sense of community is really palpable when you go up there as well.

“Whitelee is where we control all of our 40 onshore and offshore windfarms around the UK from, and we will be plugging in new assets as they come on as well. It’s our central operational hub, we’ve also got our visitor centre there and we’re also deploying new technologies there.

“We’re in the final throes of installing our major battery storage project and it’s soon to be complimented with our solar development and green hydrogen electrolyser as well.

“Ten years ago, you wouldn’t have been talking about solar and hydrogen up at Whitelee, but here we are today.”

The Netherlands is currently Europe’s biking hotspot, and Paris plans to be more bicycle-friendly by making ten-minute neighbourhoods and taking cars off the streets. But could it be Glasgow that actually emerges as the cycling champion of the world?

That’s the vision of Rashid Khaliq, chief executive of Glasgow-based charity SoulRiders, which combines introducing communities to cycling with a sustainability-focused entrepreneurship that saw the launch of its Revolutionize edition.

It is Scotland’s first integrated e-cargo bike delivery and food waste service, made possible thanks to an allocation of £140,615 from SP Energy Network’s £20 million Green Economy Fund. The sum allowed SoulRiders to purchase five of the special bikes in 2020.

But while the initiative has already saved several tons of carbon by replacing car and van use, it was also able to adapt quickly during the pandemic.

Khaliq explains: “When Covid-19 kicked off, one of the first things that we adapted was using Revolutionize to create Covid-19 distribution sites. Folk needed basic necessities – medicines, all those kinds of things – and doorstep delivery.

“Micro-mobility solutions such as ours also feed into e-commerce. The DPD and Amazons of this world, they are all looking for last-mile and first-mile solutions,” Khaliq adds. “And I think Glasgow is prime. The river here has huge potential when it comes to development. So, we’ve got this blank canvas template in a major city which we can design as we please.

“My concern is that the people who are going to set the frameworks don’t realise how much of a sweet-spot solution micro-mobility is and how it feeds into the other solutions.

“So, I’m working with the University of Strathclyde talking about repurposing commercial buildings to create micro-hubs and regional hubs across the UK, but we would love for Glasgow to be that flagship cycling city.”

It’s a vision born out of Khaliq talking with a friend in his office about how unusual it was to see anyone from a diverse background on a bike. It led first to a cycling group, then charity chapters, and now this.

He says: “It’s quite amazing how this grassroots community organisation has gone strategic, because our approach isn’t a top-down or bottom-up – it’s a balanced approach – grass roots scalability. This fits into net-zero place, net-zero city, smarter, more sustainable cities of tomorrow.

“But without the Green Economy Fund and SP Energy Networks, part of the ScottishPower group, we would not be where we are. It was the catalyst and absolutely everything for the project.”

Edinburgh’s Old Town buildings may be architecturally and historically wondrous in terms of look and character, but they pose a challenge like no other when it comes to solving deficiencies in terms of energy performance.

Grandgirard adds: “We demonstrated in historical buildings you can improve things, you cannot go as far as you would in a new construction as you need to preserve the character and the historical significance of the building. But on a case-by-case basis it can be done.”

Time to take action: we're on it.

At ScottishPower, speeding up the journey to net-zero is at the heart of everything we do. We’re investing £10bn in the UK up to 2025 – £6 million every working day – doubling our renewable generation capacity and modernising our electricity network to support green transport and heating. Our plans include new solar, wind and battery infrastructure – ready for the increasing demand for green electricity and helping our customers to do their bit too.

Join us on a faster journey to a greener future.